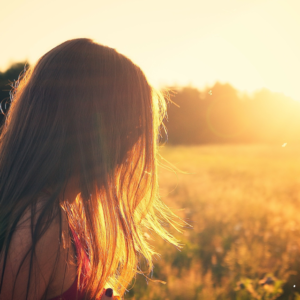 Four months ago I found a lump in my breast. And the Spirit clearly said, “This lump is a gift.”

This summer was the first time in a decade that I felt well. I started sleeping, I had energy, the aches and pains of chronic illness were minimal. On top of that, my son’s health had improved enough for us to experience the edges of “normalcy.” My husband and I looked at each other and whispered with relief, “We’re not in crisis mode anymore.”

So on that mid-summer morning with a threatening lump at my fingertips, I wondered through frightened tears, What if this is cancer? After all we have been through, what if we’re about to face our biggest health crisis yet? God wouldn’t do that, would he?

We began a long and complicated testing process. Some days I had all the peace in the world—miraculous calm and confidence in God’s goodness. Other days I couldn’t loosen fear’s vise-grip on my heart.

Don’t make me walk this, Lord, I begged him.

And then just as quickly: But if this is where You are going, I want to go with You. I don’t want to miss out on what You’re doing.

Even in the scariest moments, holding my breath for that decisive phone call, I knew he was with me. And as I hid myself in him during those waiting weeks, he confirmed again and again, “This lump is a gift.”

What kind of gift, I didn’t yet know. I hoped for the best, but readied my heart for the worst.

Because what if the worst was the gift?

I’ve lost several dear ones to cancer in recent years. Two to breast cancer. I’ve watched the slow dying process and know that the worst can be cruel.

I don’t want to suffer. I don’t want to lose my breasts and my hair, prematurely age, and suffer more aches and pains. What comes naturally to me is the Art of Preservation. I want to save my life, not lose it.

But looking back at 41 years of life, filled with various trials that have preceded this one, I can say with confidence: It’s always been in the losing—the surrendering—that I have found Life.

It would be easy to say, “Nothing prepares you for a cancer diagnosis”—but it wouldn’t be true. God has been preparing me for the past 19 months.

In April 2015, I resolved to address some areas of emotional immaturity in my life (namely, how to maintain my joyful identity in the midst of relational conflict), and I began working tirelessly through Life Model Works’ amazing resources. I saw grace and growth like never before.

Then, at the beginning of this year, I had a renewed appetite to read books about people who have suffered with joy and courage. I devoured one biography after another—I couldn’t get enough.

On top of that, God had me praying through the Psalms, which allowed me to tread every square inch of my life in truth. My Abba and I, we covered so much territory together between March and July.

I experienced the Spirit’s power as never before, and was keenly aware of his purposes in my life.

So when I sat in my doctor’s office on a Tuesday afternoon early this month, I was ready for the diagnosis: Cancer.

It is in our human nature to be constantly surprised by life’s hardships. To ask “why me?” But Christ modeled a life of joyful suffering—and then called us to follow in his footsteps.

Christ came to give his life as a ransom for many. He was a man of sorrows, acquainted with grief. But!—for the joy set before him he endured the worst suffering the world has ever known.

My diagnosis is not the worst suffering I can imagine. Far from it. (I could quickly recite for you a list of far worse scenarios!) But still it feels like too much in some moments. On the darker days, my heart has echoed the Psalmist’s: “All Your waves and breakers have swept over me.” A decade of numerous intense trials has not earned us a season of ease and pleasure. Instead, the storm rages on.

But as C.H. Spurgeon said, “I have learned to kiss the wave that dashes me against the Rock of Ages.”

These forcible waves, they carry me to the One who says, “Peace. Be still.”

Many of our friends have asked us how our six-year-old son, Jeremy, is doing with all of this. To state the obvious, it’s hard. We decided early on in the testing process that we’d share frankly with him—but we’d do it in such a way that hopefully modeled joy and trust in Jesus. We want him to learn how to navigate suffering with an enormous view of God. To know the way back to peace from intense negative emotions.

The night we received my official diagnosis, Jeremy had tears and hugged me tight. I locked eyes with him and said, “This is hard, isn’t it, Bud? It’s not good news. But God is with us, and He turns everything for our good. Everything. So we don’t need to fear. And God is going to use this in your life in amazing ways.”

Jeremy paused, then asked us to read the story of The Fiery Furnace. My husband Eddie read the account in Daniel 3, which includes Nebuchadnezzar gasping,

‘Did we not cast three men bound into the fire? But I see four men unbound, walking in the midst of the fire, and they are not hurt; and the appearance of the fourth is like a son of the gods.”

Eddie closed the Bible and after another pause, Jeremy said,

“There are four of us in this family.”

God doesn’t waste suffering even on a six-year-old. He’s growing a tender heart strong through the uncertainty. He’s teaching joyful courage to a little man who may need it in his generation more than I’ve needed it in mine.

God is with us. In the fiery furnace. In cancer. In your dark troubles too, dear one. He is a good God who gives gifts that are weighty with glory.

P. S. – We covet your prayers for us, especially that we would experience such peace and joy that our medical team and unbelieving friends would listen with enlarged hearts as we speak of the good God who has healed us from the worst imaginable disease: sin. Suffering can be the most compelling conduit of good news, and I don’t want to miss caring for eternal souls who might be facing a fate infinitely worse than cancer. With all my heart I believe this gift is not just for me and my family but also for many others. Pray that we will abide in Christ and bear much fruit in this. Thank you so much for standing with us!

The Lord called me from the womb, from the body of my mother he named my name. And he said to me, ‘You are my servant …. in whom I will be glorified.’ He formed me from the womb to be his servant …. For I am honored in the eyes of my Lord, and my God has become my strength.  (excerpts from Isaiah 49)

Afflictions work for good, as they make way for glory. Not that they merit glory, but they prepare for it. —Thomas Watson

What is any illness to Him? One touch and it would be gone. But I wonder if the Lord is saying not only to me but also to you, ‘See to it that you are in perfect accord with Me and then trust Me to withhold no good thing.’  —Amy Carmichael