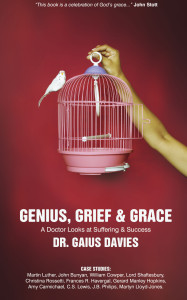 Depression first found me when I was an idealistic 19-year-old with plans to change the world. Panic attacks and obsessive thought patterns soon followed, and the promise and excitement of my 20s was to be often overshadowed by mental and emotional angst.

I’d grown up reading the biographies of dead saints: men and women who gave up everything—from worldly comforts to their very lives—in order to love Jesus and love others. My young life was immeasurably shaped by the compelling examples of these courageous believers who accomplished great feats for the Kingdom of God.

I had known they were broken too. Many had suffered cyclical depression as I was now experiencing in my 20s, and I clung to their stories of God’s faithfulness in their brokenness. I needed to know that others had walked this path before me and still been fruitful and effective in living out God’s purposes for them.

But 17 years after my first depression—now a wife and mother at 36—yet another season of crippling panic attacks, insomnia, and darkness was upon me. The long-awaited joys of marriage and motherhood were finally mine, but I was struggling to string together three rational thoughts. I wrestled with God. Why had I waited 15 years for such joys, simply to watch them snuffed out by this demon depression?

It was then that I first laid eyes on an old paperback that would serve as the light at the end of my tunnel: Genius, Grief and Grace. The book boasted 11 case studies of saints, written by widely acclaimed British psychiatrist, Gaius Davies. I opened it with a kind of desperate hopefulness.

Many of the saints in these pages were already familiar to me. In fact, I felt as if I’d walked miles upon miles in their shoes through my years of poring over their stories. But these accounts promised a more clinical look at their sufferings, temperaments, and tendencies. Perhaps here I would see that “even the flaws in the prism of personality may demonstrate, in a special way, aspects of God’s grace.”

That is what I longed to know—that I wasn’t incurably crazy. That even my tendency to depression and my personality flaws could be used to God’s glory. I believed it to be true, but in these pages I would see it proven as true.

Through tears, I read of Martin Luther’s panic attacks and scrupulosity, as well as his chronic illness. I not only resonated with his weaknesses, but I also felt hope at Davies’ commentary:

“It is not surprising that . . . he often experienced his inner strength as greater at times of physical weakness.”

I could relate to that. Even in this dark season I saw God powerfully at work in and through me.

Strangely, my weary heart soared to read that John Bunyan suffered an obsessional disorder (where “the person seems compelled to suffer the presence of thoughts and feelings that he or she would like to disown, but cannot”). This author of The Pilgrim’s Progress and 59 other books—a man of genius and incomparable imaginative powers—was at times riddled with “a perplexed and despairing mind.”

By this point, Davies had me captivated. His tender and tactful treatment of both the heroic feats and the intrinsic frailties of these saints was a balm to my own feeble heart.

The account of Lord Shaftesbury (the Englishman who helped bring an end to industrial child abuse) made me catch my breath:

“He was by all accounts abnormally sensitive, and he was described as being without that extra skin needed to be tough in politics. But his heart drove him on, and his very clever brain and his iron will made him win against heavy odds.”

Being too sensitive myself, and often placed in situations where I could have used a thicker skin, I rejoiced at Shaftesbury’s example: press on even when you’re not naturally qualified for the work God has called you to.

I wish I had time and space to highlight the stories of Christina Rosetti, C. S. Lewis, Frances Havergal and five other giants of the faith, as sketched by the compassionate and competent hand of Dr. Gaius Davies.

Dark seasons can be used as tools in God’s hands. Before modern medicine and diagnoses were available, both psychological and physiological disorders went largely untreated. Yet God was in even these unresolved issues. Illness and angst were tools wielded in his perfect hands, to do his children good and bring himself glory. Even with the unprecedented medical resources available to us today, God sometimes allows us to linger in physical and mental brokenness so that we know and love him more, and fulfill his purposes in our lives.

While I will never experience the genius, success, and acclaim of these world-changers, I do have the same great Spirit living powerfully within me—to transform me into his image, “from one degree of glory to another.”

As Bunyan said of Luther’s writing, so my heart says of Genius, Grief and Grace: “I found my condition in his experience, so largely and profoundly handled, as if his book had been written out of my own heart…”

**This article was originally posted on December 9, 2014, and also appears on ERLC.com.