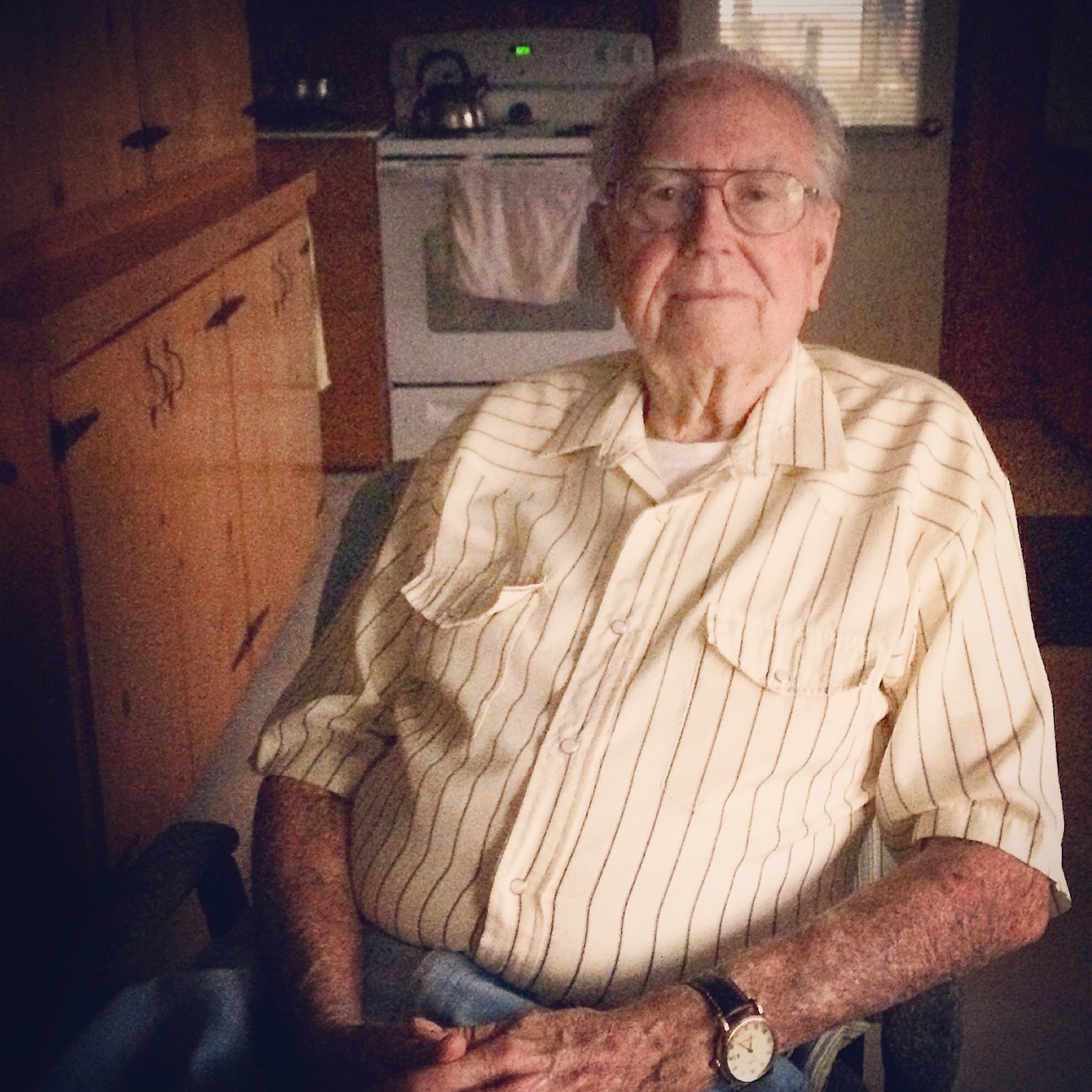 It was the year Winston Churchill became British minister, Albert Einstein unveiled his theory of relativity, and Babe Ruth made homerun history. And while it didn’t make any news headlines, the birth of Henry Stuursma was no less extraordinary. Humbly begun in a small town of Iowa on April 25, 1921, Henry’s life would be shaped by constant change, courage, sorrows, and joys—and these in turn would forge a legacy of love.

Henry was the youngest of seven children, and when he was just 18 months old, his mother died suddenly, leaving his sisters to raise him. Several years later, his father’s chronic asthma drove the family to seek a better climate in Denver, Colorado. There his father met and married his second wife—providing little Henry with a much-needed mother.

Two of Henry’s brothers were twins, one of whom had Down syndrome. In the 1920’s, very little was understood about the syndrome and his brother was labeled a Mongloid. Doctors counseled his parents to institutionalize their son, but they refused. So Jake remained an integral, beloved part of the family, and Henry learned to love and value a sibling with special needs.

When his asthma didn’t improve, Henry’s father loaded up his wife and three children (the oldest four remained in Iowa) and set off for what he’d heard was “the land of milk and honey”—California. It was 1929, and it took two weeks to drive the 800 miles from Denver to Mentone. Henry recalls the trip with fondness even though his seat was the tailgate of the truck, where he shivered through rain and snow. Every time they encountered a hill, they drove up backwards; it was the only way the gasoline could reach the engine. In retrospect, Henry recognizes the strength of his mother, caring for three children in these less-than-favorable conditions:

“Mom would get up early and make breakfast. Then she’d make sandwiches for coffee time. Then she’d make lunch. And then she’d make some more for afternoon teatime. And then [she and Dad would] try early enough to find cabins and go to a grocery store because there was no McDonald’s back then. We were chasing around, causing trouble. She was busy cooking and fixing things for supper. She must have worked her head off. And she was a city girl too. In fact, she came out of Holland. Her dad was a professor at University of Leiden. And she came here and married in Denver, and that guy died, and then she married Dad. And she came out here to work at a chicken farm.”

Henry’s father had his heart set on working a dairy farm in Mentone, but when that fell through, he started a chicken farm instead. Henry remembers the Flood of 1938, when the streets were submerged and “rocks as big as a VW” were loosed from the mountains and rolled down, causing the ground to quake. The storm knocked out the gas supply, which was the heat source for the farm’s chicks. Henry’s family had just purchased 2,000 chicks, so they brought them all inside the house, spread out newspapers, and kept them warm by the stove. “We had a noisy couple of nights,” he says with twinkles in his eyes.

Henry speaks of many close-knit relationships, of Redlands Christian School days (he was in the first ninth-grade graduating class), and of the church on Clay Street, filled with young people who loved choir performances and “stupid plays” that would turn out huge crowds.

In Love and War

Henry’s personal relationship with God grew under the influence of the Southern California Young People’s Group. The new association drew participants from as far away as Los Angeles, a city that he says was “just starting; roads weren’t that good; [it was a] long haul to L.A.” It was at a Young People’s summer camp at Forest Home in 1940 that Henry met “an amazing woman” named Betty. It was love at first sight.

Betty lived in L.A., so Henry scraped together gas money from his weekly salary of $10 to go visit her and take her on dates. Then news came that postponed any hopes they had of marriage. At a Young People’s gathering he and his friends “heard war was declared, and we looked at each other and said, ‘Our days of freedom are over with; we’ll be called.’ Sure enough, it wasn’t long. I could have been exempted [because of the family business], but I felt like I should go.”

Henry was stationed in Alaska, and he and Betty exchanged love letters. When he was reassigned to San Francisco to work in embarkation/debarkation, Henry was finally free to marry Betty. It was 1945, and the war had made it difficult to find a place to live in the city, so the newlyweds shared an apartment with another couple. He happily recalls meeting “a lot of interesting people” during that time.

When the war was over, he and Betty returned to Mentone where they started both a new chicken farm and, more importantly, a family. They bought a tiny house with knotty pine walls and a huge yard, added 6 children and 30,000 chickens, and called it home.

“When I look back I see how my planning was so poor, but the Lord always provided and we never went hungry. We had some rough times and almost lost the business. We built it up from practically nothing. But He supplied our needs.”

Henry’s love for his kids (and his 18 grandkids and 18 great-grandkids) is contagious. “They are just tops,” he beams and points to their pictures all over the walls. But parenting had its sorrows too. Henry and Betty discovered their eldest son had Huntington’s disease. The effects of the disease were cruel and cost the son both his marriage and an influential job at a hospital in Colorado. He died at the age of 50. Henry explains that the worst part of it was the fact that his grandson also inherited the disease, and passed away at age 30, just two years ago.

Henry and Betty cared for their son until his death. Betty also took on the full-time care of Jake (Henry’s brother with Down syndrome) till he passed away at 64 years old.

“She was an amazing woman. Never had an argument. She wouldn’t argue. Nope, if we disagreed: ‘Okay,’ she’d say. ‘You have it your way,’ and she’d go on. And next time I’d have a Bible verse laying on my desk or somewhere.”

Henry chokes back tears as he talks about his bride of 69 years. Just two months ago, and just shy of their seventieth wedding anniversary, Betty went home to be with Jesus. Henry still speaks in terms of “we” and “us,” as if Betty might walk into the room and sit beside him at any moment.

But while her presence is still keenly felt, her absence is what Henry describes as “terrible.”

“Right now I feel like someone dumped me in the water and I don’t know which way to swim. It’s terrible. But the Lord gives you strength, and I’m so glad she didn’t suffer. But it’s awful lonesome bad.” His voice breaks with emotion.

“Next month would have been seventy years. And the secret—and I didn’t know it, and I’m finding out now—she had drawers. Every drawer in the house was stuffed full. And I says, ‘Honey, what are you doing with all that?! How come you’re using every drawer in the house?! I knew she was scribbling, and I thought she was writing her own personal diaries, but… It’s prayers!! She’s got books of prayers for every birthday the kids had. Every event. I didn’t know that. I’d be at the table asking, ‘Honey, do you want to pray?’ ‘No, you do it better than I do,’ she’d say. But here I find books of her prayers. What a woman. What a woman. Here she was a city girl, and I took her to the farm. And we didn’t have it easy. And she never complained.”

Henry sits across from me at his turquoise-colored kitchen table, and as twilight settles upon us through the big picture window, I’m teary-eyed. This house that once burst at the seams with busy love is now remarkably quiet. Henry would say it is too quiet.

But if walls could speak, this house would dance. Here is a legacy of love—a story worth telling.