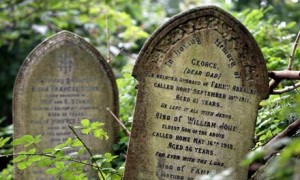 I walked reverently between gravestones, mindful that the soil under my feet was rich with history. My eyes scanned epitaphs while my heart filled in untold stories….

The wealthy were marked by ornate and gaudy monuments; the poor with simple markers and few words.

But they were all dead.

The rich, the famous, the poor, the uneducated, the celebrated, the beautiful, the ugly—they all shared the same end. Only their names etched in stone and a small plot on a grassy knoll proved they’d once lived and breathed.

True, a few have defied death’s amnesia—their names have out-sung grass and gravestone. Their achievements are remembered in history book, holiday, and song.

But only one man defeated Death. Only One stared Death in the face and said, “Game over.”

When God came to earth as man, in the form of His Son Jesus, He came to die—and by dying, to kill Death. He was the only one who could do it. The rest of us were powerless, at Death’s mercy from the moment we drew our first breath.

I’ve stood at many a graveside these past four decades, attended too many funerals to count. I’ve gathered under the black canopy, watched the closed casket descend into the ground, then walked the long silent walk back to my car, through grass checkered with stone.

While man spends his life trying to outsmart death, Christ walked straight into it. While His closest friends were dozing off, drawing swords, and denying they ever knew Him—while His enemies were taunting and torturing Him—He resolutely gave Himself over to the cruelest agony ever known to man.

It wasn’t just the cruelty of crucifixion. Christ took the full measure of our sin upon His body… and became sin. He bore, in both body and spirit, the full wrath of God that we deserved.

And the earth shook, the sky went black, the curtain was torn in two.

The Son of God gasped for three final words, “It is finished,” and surrendered Himself to death.

…that He might defeat it once and for all.

Death could not keep Life in the grave. A large immovable stone and highly trained soldiers could not silence the Son.

Critics and naysayers have spent lifetimes trying to rewrite history, trying with all their might to force Jesus back into that tomb.

But He would not stay there. He could not.

Like the dawn brushes off the night, Christ brushed off death and walked out of the grave. And Death, with all its sting and despair, no longer had the final word.

“In Him was life, and the life was the light of men. The light shines in the darkness, and the darkness has not overcome it.”

Cemetery walks remind me that death—with all its grievous pain on this side of eternity—is not ultimate reality. These stone slabs compel me to live Life—the Life that Christ gave me because He died for me… and rose again.

48 thoughts on “The day Death died”