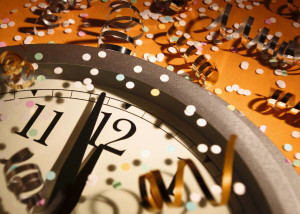 For years I religiously observed a late-December ritual of journaling my hopes and goals for the New Year. It was an ambitious, idealistic list, but even so, it was written out of great faith. With all my heart I believed God would show up in the next twelve months of my life. (I just didn’t yet understand that He often shows up so differently than we imagine.)

It must have been in my late twenties, after another year had passed without a husband (an annual hope that always made the top of my list), that the ritual finally lost its charm and appeal. Plus, what with my failed attempt at goals like “Memorize a book of the Bible,” I realized The List had come to represent more disappointment than hope.

Despite a decade’s distance between me and those annual lists, there’s still something in my heart that longs to commemorate this new beginning, to celebrate a fresh start. I so badly want to seize the time God has given me here on earth, and I still have future hopes and ambitions that stir within me. The turning of a new year beckons me to look behind and ponder…. and to look ahead and hope.

This past year, in all its agony and ecstasy, has led me into deeper worship. And to worship God, I have to believe Him, take Him at His Word. It’s been a year of learning to say, No matter what my circumstances, regardless of what others are doing around me, I will look up at You and declare….

And as I’ve worshiped God for WHO HE IS, my heart has been changed.

This fall I wrapped myself up in the book of Genesis, the quintessential beginning. And I found myself worshiping God again and again as He revealed Himself in new ways on those old familiar pages. From the very beginning, He wanted us to know Him and adore Him. And at the beginning of 2014, He still wants the same thing. He is ready and willing to reveal more of Himself to us—revelations that will sustain us through every circumstance with joy and purpose and hope.

Every single time I looked up at Him this past year, even if it was from the bottom of the pit, He sustained me. Without exception, He has been more than enough for my every need and my darkest days. Yes, there have been pressures that have been too great for me to bear, circumstances too much for me to handle, but He has pressed them upon me—the “too much”—so that He could become my Much More.

“Cast your burden on the Lord and He will sustain you; He will never permit the righteous to be moved.” (Psalm 55:22)

I am stunned at how often I needlessly carry my own burdens—for hours, days, weeks at a time. And the only reason I don’t quickly cast them on the Lord, is that I don’t believe He is who He says He is. Much of the time my view of Him is grievously small. In my pride and self-reliance I walk around bearing a load that was never intended for me to bear. HE bears. HE sustains. And when I cast my burdens on Him, it is an act of worship. I am agreeing with Him that He alone is God (and I am not). I am declaring that He is great, trustworthy, safe, good, and powerful.

Oh dear one, we’ve got to stop looking at Self and Circumstances and Others and instead lock our gaze on God, on all that we have in Him. He is the Best and the Only, our Portion and Great Reward, the Beginning and the End.

So instead of reviving my New-Year’s-Eve list-making ritual, I’m asking God to enlarge my worship of Him as this New Year dawns. I want to ring in 2014 with mind-boggling thoughts about Him and anticipate His goodness in the coming twelve months.

And all these dreams and fears and longings and goals and doubts and hopes welling up inside me—they find their rightful place when I worship God.

“Those who look to Him are radiant, and their faces shall never be ashamed.” (Psalm 34:5)

NOTE:
I originally wrote and posted this two years ago but find its truths as applicable today, at the dawning of 2016, as they were for 2014. And as we look ahead to a new year, let me encourage you with three fabulous resources for a prayerful, Bible-saturated trajectory:

Seven Ways to Approach Your Bible in 2016

The Role of Desperate Prayer