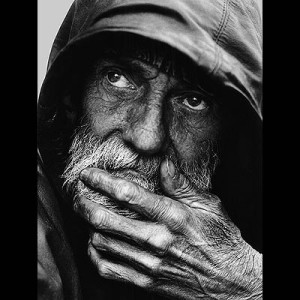 He stole through the church doors, long, lanky, and strong of stench. His bony limbs were swallowed in oversized tweed, his hair a matted mess of gray, fingernails long and filthy. His face was gaunt, eyes expressionless.

“Homeless” would have been a generous term for this man.

He sat toward the back of the sanctuary, then slipped out before the brave-enough could greet him after the service.

But he came back. (Something brought him back.) My heart sank when he walked through the church doors during my office hours one day. I should want to help someone like this, I chided myself. Simple conversation proved futile, which seemed a mercy—he couldn’t have had a bath in years and the smell was repugnant. I offered him a cup of coffee and went to find the pastor (who happened to be my dad).

The man had a name, and soon Roy Pilcher was a regular at church, unpredictable as he was in the timing of his visits, with no regard for weekday office hours or Sunday service protocol. Occasionally he would disappear for weeks on end, and just as we wondered if we would ever see him again, he resurfaced looking and smelling as ghastly as ever. A quiet man, Roy would stand in silent reverie or sit alone at the back of church, legs folded, bony knees sticking out of his burnt-orange pants (those same pants, week after week). But when he sat with my dad—who, for all I know, became his sole friend in life—he would become so engaged in the conversation that he’d suddenly jump up, slam his fist on the table, and yell out random statements like,

“Those children in Russia need Bibles!”

I always felt uncomfortable around Roy, but I learned how to hold a brief conversation with him and care for him in one small way: every time he walked through the church doors, I offered him a cup of coffee and a chair in the Fellowship Hall while he waited for “The Pastor.” (It was never “Pastor Greg” or “your father”; it was ever and only “The Pastor.”) Other church members also made an effort to reach out to Roy, but he talked very little and when he did speak, it was largely nonsensical.

Roy became a strangely beloved part of our church family. Of course he would never pursue membership or volunteer to serve in a ministry or reciprocate the love shown him. He would never be dependable or devoted. He would come and go as he pleased, needing help and conversation and cups of coffee.

And although I never would have put it into words, subconsciously I considered Roy a lesser member of our church body. The idealistic, self-righteous, 22-year-old version of me understood so little….

When Roy needed a ride home one day, we discovered he lived just a mile from our church, in a small shack so filthy it deserved to be condemned. But the shack was set on valuable property, and Roy owned it. We found out later that he also owned property in the Northwest and sat on a sizeable amount of cash.

This mangy man had more money and assets than I ever would, and that revelation would forever change me and my assumptions about people.

Roy’s wealth remained confidential, and it never changed our treatment of him. Roy was Roy, and his money was irrelevant.

Roy walked into the office again, the same rancid wildness about him, but this time with a surprising new agenda: he wanted to bequeath his property and cash to the church, to further its local ministry, and to buy Bibles for children in Russia.

A man who desperately needed a shower and a good meal to eat, a car and a change of clothes, resolved to give everything he owned to God’s kingdom work. He did it behind closed doors, with a fanatical look in his eyes and urgency in his voice.

And that unraveled my neatly packaged Christian paradigm.

I sang on the worship team, directed kids’ choir, and discipled teenage girls while I waited for my missionary-husband to ride up on his white steed and carry me off to a notable overseas ministry. Together we would change the world for Christ!

But this man was a little insane and had no spiritual ambitions to speak of. He lived in a dump and didn’t care one wit about what others thought of him. Yet he secretly gave everything he had as if it was the most natural thing in the world.

When a man like Roy comes along, he brings a raggedy version of God’s love and divinely disrupts our tidy world, our neat and clean Christianity.

After six years at our church, an aging Roy was too weak and disoriented to remain on his own, so my dad helped him settle into an assisted care facility in town. Dad got the call every time Roy escaped the premises, and he cared for him to his dying day. Not many mourned Roy’s death, nor cared about what he’d done with his life. But stealth kingdom work had been done because one unlikely, unkempt man gave everything he had to God.
Scriptures for further encouragement: Mark 12:41-44; Matthew 16:24-27; and Matthew 6.